I was out at the Toronto Outdoor Art Exhibition, yesterday, with my daughters. The exhibition started on Friday and will close tomorrow at 6PM, at Nathan Phillips Square -- promising to stay open even if it rains. As usual, there was a mix of art -- from drawing, painting & photography, to jewelry, fibre and ceramics. I tend to give more credence to the former -- it feeling more like real art to me, rather than the functional stuff. Real art is useless. It's to be appreciated despite the lack of function.

Regardless, I wandered around and took in most of the exhibitors. The following are the ones that appealed to me. 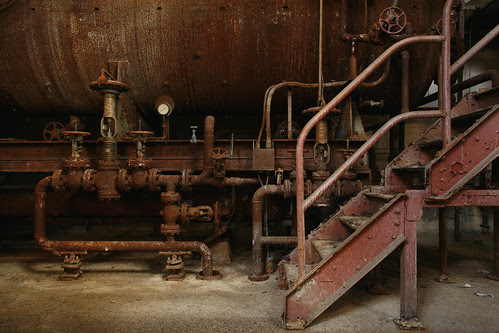 Steve Jacobs Photography -- Jacobs' subjects are what appeals to me. It's something I'm interested in doing myself. He explores the abandoned artefacts of human habitation. It's almost archeological, his photography.

Joanna Strong -- Strong paints, among other things, rubber band balls. I'm not entirely sure what's fascinating about rubber band balls, but the paintings looked cool -- and they were all done in oils.

Jérôme Bourque -- is a French photographer who shoots some really weird subjects. I like how he juxtapose different elements in his photography. Totally cool, and jarring.

Jorgen Lauritzen -- Lauritzen is a painter that likes industrial subjects. He doesn't have a website, and I couldn't find any other examples of his work, other than the above. I remember seeing the above painting (or something quite similar) -- but I don't remember much more of his art. Dude, get a website, not just LinkedIn. 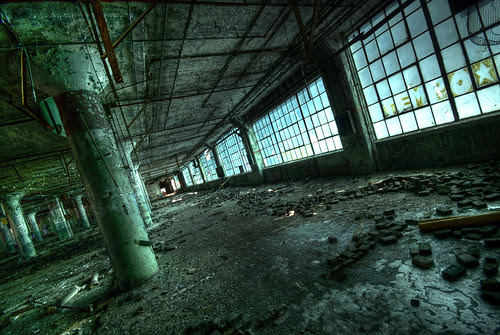 Tammy Hoy's Forgotten Spaces -- I'm starting to see a pattern in my photography preference here ... I seem to like rust, dilapidation and industrial wastelands. Hoy's photography is just that. Things left behind by people, and slowly being returned to nature. I find such photography cool for some reason.

Robert Dyke's Rust & Relics -- Dyke and Hoy must know each other. They photograph similar subjects. And yet again, I enjoy seeing human remnants being reclaimed by nature.

Catherine Hibbits -- Hibbits works with glass, and while it's not a medium I care much for, she did have a couple of glass art pieces I liked. She had a couple of vases out, with silhouettes of walking figures on them. I liked those. 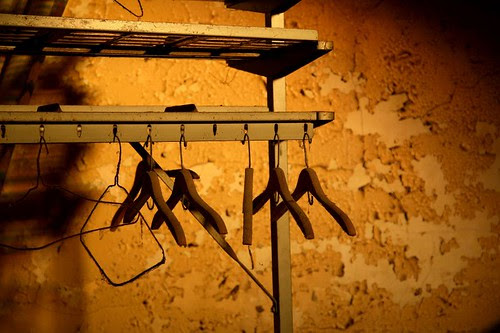 Russell Brohier -- Brohier is a fine art photographer ... whatever that is. The stuff of his that I enjoyed, was again the rusted, abandoned human spaces. Maybe it's just me, but this seemed to be the subject for a lot of photographers at the exhibit. I wonder if it's a reflection of a broader undercurrent running through society. After all, aren't artists supposed to be reflecting back to society what society seems in capable of articulating?

Rebecca Codack -- Codack is a painter, capturing on canvas, what she finds in nature. I was especially taken by her flowers.

Eric Cator -- Cator is a photographer and artist. He paints, sketches and takes photos. I really liked his paintings of people standing around. The one with the guy holding the boom mike to the fire hydrant appealed to me for some bizarre reason.

Sara Golish -- Golish had some really stunning paints in the fantasy genre. She had a mermaid, fairy, nymph, earth goddess ... some really amazing pieces. She rendered them with oils, and the figures just came to life. She is very skilled at life art.

Rob Croxford -- Croxford had some of his urban series on display ... and I found out by visiting his site, that 10% of the proceeds from the series are being donated to the David Suzuki Foundation -- which is pretty cool.

Vanessa Rieger -- Rieger has a thing about the neighbourhood watch program. She's made buttons, t-shirts and yes, even art. Her art is cool.

José Enríquez -- Enríquez is an Ecuadorian who produces really colourful art, leaning towards the fantastic. I especially like his use of bells in his art.

Mathew Borrett -- Borrett has created some very detailed pieces of work. His work draws you in to study the details, but hides the secrets.
Posted by dabydeen at 7/13/2008 12:30:00 am